Deep Cove Kayak Centre is the perfect location to start your paddling adventure. Indian Arm is a scenic fjord surrounded by spectacular mountains. It is an excellent recreation and tourism destination. Deep Cove is located only 25 minutes from downtown Vancouver.

There are a couple of interesting stories about Boulder Island. Local legend tells that it used to be a burial ground for the Tsleil-Waututh people who still live along the edges of Indian Arm where the dead would be wrapped in cedar bark and placed in the trees on the island. Christian missionaries denounced these traditional burial methods and the bodies were moved to an ‘acceptable’ burial ground which can still be seen on Dollarton Highway past Cates Park. When the body of Waut-Sauk, a former Chief who had lived in the late 1700s and early 1800s, was being moved two orcas (killer whales) were seen to accompany it, and then disappeared from Indian Arm. Orcas have never been seen in Indian Arm since.
Boulder Island got its name from a large boulder that used to lay on its rocky shore. Some time ago (this means I don’t know how long) a barge anchored off Boulder Island. Quite often barges would drill anchors in the rocky outcroppings. After the barge arrived the fog set in and local residents recollect hearing drilling for several days. When the fog cleared the barge was gone and so was the boulder. It had split in 2 and tumbled into the water.
The Island is now private and you are not permitted to land on it, but there are often eagles in the trees that you can spot. 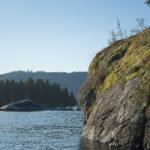 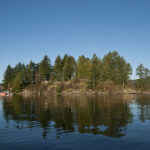 0
About Us Also in This Section: